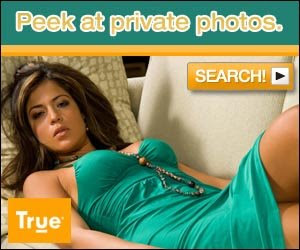 In case you're wondering, that's not an active link. It's just an image that I pulled from the side of my Yahoo! mailbox. You see ads like the one above all the time. Maybe a small part of you even wanted to click on the image, but didn't because you knew you'd be bombarded with pop-ups and spam so bad that your anti-virus program would quit on you for being so stupid.

I don't know how it is for the "big name" dating sites like e-harmony, but I'm sure even they are likely to bombard you with spam. That's why I call such ads "spam-bait". You look at that image, and it gives you a teaser like "Peek at private photos". What does that mean, exactly? Is it going to show her in her underwear going through her underwear drawer? Is it going to show her in the shower? That's probably what you're supposed to think. Otherwise, who other than some desperate schmo would click on such spam-bait unless they thought they'd be getting such a "return" on their risk?

And even if that woman was available, you think she'd be interested in regular joes like us? I mean - DAMN! - look at her! That shapely physique- that hair that you just want to run your fingers through- those "come hither" eyes... it's enough to melt any average American dude! But someone who looks like her would want some super stud. Are you a super stud? Although I'd like to think that I am, I know that I'm not. And yet, that company posts her picture there so that us poor dumb slobs can fantasize - hoping against hope that a hot chick like her might actually want us, even though we know that we have a better chance of winning the lottery.

Logic would also tell you that she might not even be real. Not that the woman herself doesn't exist, but rather, the way she looks. The odds are that she has been Photoshopped extensively to have no faults and to maximize her hotness. Yes, those of us who have thought this through will see past this well-executed advertising ploy. And yet, enough poor desperate dudes are out there that they fall for it - and the company stays in business while spamming the poor guy's mailbox like crazy.

But now you're forewarned, and as that saying goes, forewarned is forearmed. Your best bet is not to deal with such fantasy women, but instead try to work with the real women around you. They may not look like the women in the ads, but then the women in the ads don't look like that, either. It's called life, folks. It may not be as pretty as it's portrayed in the ads, but at least it's real. Go out and get a dose of reality, folks. It's out there waitin' for you.

I definitely would have given some serious thought to clicking on that link - I'm as much schmo as anyone else.

But don't take yourself out of the sweepstakes here, J.P. You never know until you ask, I say.