Short note on the Journey to Nerdville

Just in the past couple of days, I've learned about something called "MP4" files, or "vodcasts", and that they can be played on newer iPods and cellphones. They are like MP3s, but in video format. For an Old School Fool like me, that's just too cool. I was looking into getting a cellphone soon anyway, so I'll ask about that feature while I'm at it. Of course, I'll comment more on this when I get a cellphone and try to download an MP4 file.

While it is good that Patrick Kennedy is checking himself into rehab, who doesn't believe that he got a free pass that none of us would have gotten had we done the same thing? The famed "Kennedy Mystique" makes the Kennedy family the closest thing that this country has to royalty, but I wonder if that does more harm than good for the Democratic Party? As "the party of the little people", party members should be willing to take their lumps like anyone else when they do wrong. Kennedy getting a free pass sets a bad example, and worse, it gives ammo for the conservative talk shows to use against the Dems. The issue may have been largely dropped from the mainstream media, but don't think that the conservative talk show hosts are going to let this issue get away too soon.

What a bad weekend for the local pro sports teams. I don't know if it was rust on the Dallas Mavericks' part from being off for almost a week, or that the San Antonio Spurs came to play, or if it was both, but the end result is that the Mavs lost by two when it was all over. However, I don't doubt that Coach Avery Johnson is all over this, and that he already has something in the works for tomorrow's game. I still stand by my original prediction of the Mavs in 6.

And while we are on the topic of mystiques, the Texas Rangers got themselves swept by the New York Yankees. While the Yanks are still a formidable team, they are also a beatable team. The Rangers could have easily have gotten a win or two from this series, but I believe that they got spooked by the so-called "Yankee Mystique" (I tell ya, put a Kennedy in a Yankee uniform, and there's no telling what they can do!). It's only because the Rangers happen to be in the worst division in baseball that they happen to still have a marginal hold on first place. The Rangers are better than the team that they appeared to be in this series, and that's what's so disappointing.

I didn't get to post these last week, so here's some today. I'll try to post more of them later in the week. I made the following ads this way: My digital camera has a feature called "whiteboard" in which light colored surfaces are made absolutely white, while dark surfaces are made absolutely black. That contrast makes for some interesting pictures as shown below. Once I took the photos, I opened them up in Adobe Photoshop and stretched and skewed the image to emphasize the facial expressions shown below. Then, of course, I added text to finish it up. The end result is a visually interesting and humorous ad --which is important if people are going to remember it. 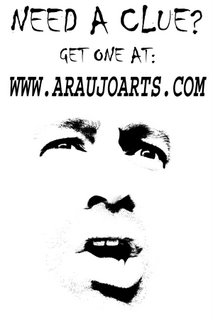 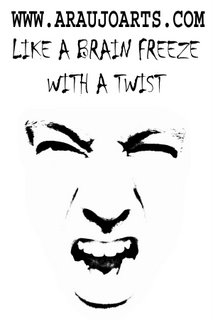