"In God We Trust" NOT.
In a move worthy of Soviet Russia era censorship, Liberty Elementary School in Colleyville, TX has removed "In God We Trust" from the face of a U.S. nickel that appears in their yearbook. The school didn't want to offend those of different religions. What a lesson to teach the children: censorship and defacing our coins is acceptable so long as you're offended. Thomas Jefferson, the face on the nickel, owned slaves. That's offensive, isn't it? So shouldn't his face be removed from the yearbook cover as well? To be safe, the school should just have this blank, silver circle without "In God We Trust" and Jefferson's face. Somewhere out there, Joseph Stalin is rolling in his grave, wishing that Adobe Photoshop had been available back in his day.

Agg-Town Fights DVD update
So far, this issue seems to have lead to some productive dialogue. I just hope that it leads to productive results instead of explaining away that these kids are "actually victims of somesuch disorder" and doing nothing. This is a problem begging for a true solution, and anything less will result in more Agg-Town Fights DVDs being produced by someone else.

The Da Vinci Code
Someone asked me what I thought of the hubbub made over The Da Vinci Code movie. I told them that this movie was to be the anti-Catholic Left's answer to Mel Gibson's The Passion of the Christ. Well, it was critically panned for the most part, and the only reason it has large audiences now is because of the amount of press given it. But I won't protest the movie, nor will I encourage others to do so. That would only give it more press, and if the critics weren't crazy about it, then why should we make any more fuss over it?

Sports
So it goes to a deciding game 7 for the Mavs and the Spurs. Sigh. If nothing else, this series has been one for the ages. In fact, 3 of the 4 series are going to a game 7. This is like college "March Madness", except it's May, and it's the pros. For a basketball fan, this has been fun! But the fun will be sucked out if the Mavs lose Game 7!!!!

The Bird is back
The bird below is named Marcela, and it hangs by my desk at work. I wanted to name it Halle Berry, but I got voted down, and it was named Marcela after a popular student worker who had just graduated at the time. It hung there for about a year and a half until about Christmas time last year, when I hung something else in its place. Anyway, now seemed like a good time to put the bird back up because I have a blog, and it's a liberal bird (this is so because it has a sign about Austin, Texas, which is a liberal town) --and sometimes I need its take on the left wing side of various issues. Next I need to find a conservative bird to give the opposite viewpoint, and we can have some very interesting discussions (Okay, who out there just said that I need a life?). 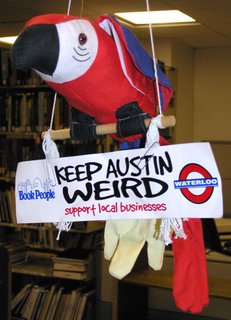