U.S. Congressmen give themselves a pay raise

Yep, those congress dudes gave themselves a pay raise. Grass is also green. The sun rises in the east and sets in the west. Water is wet. Why this was news, I don't know. Ah, if only it were that easy to give myself a pay raise.... I would have been retired by now! The hardly unexpected thing is, they did it a sneaky way in which they didn't have to actually vote on giving themselves a raise --it's automatically done due to some legislation that automatically factors it in ----

---unless the House votes to deny themselves that raise.

---but they'll deny themselves a raise the very same day that I marry Halle Berry.

Well, the Dallas Mavericks sure made themselves look silly in Game 4. Talk about their butts being handed to them...

Even with that, I still believe that the Mavs are going to win it all. But now, they're going to have to work harder for it, and even harder than they expected, because Jerry Stackhouse has gotten suspended for a game for a hard foul that he gave Shaquille O'Neal. Silly Stacky. Only Shaq can get away with those kinds of fouls!!

But I got faith the The General will straighten them out --you'll see. Coach Avery has made those adjustments so far in these playoffs, and he just needs to do them for two more victories. In a move to get away from distractions and to help them get their focus back, The General has moved his team's practice from Miami to Fort Lauderdale.

Uh... Isn't Ft. Lauderdale where all those Spring Breakers go to? And isn't that were they film a lot of those "Girls Gone Wild" videos? Well, the Mavs' attention will certainly not be distracted by the bad vibes in Miami while they're away in Ft. Lauderdale--let's just hope that they stay focused on basketball, and are not distracted by something else entirely!

A car chase in Dallas ended in a very unusual way. Somehow, the taxi van that the thief hijacked ended up dangling --yes, dangling-- from a utility pole wire. The attached article mentions that the taxi ran into the pole, but it does not explain how it ended up dangling from that wire. My guess is that he hit the pole so hard (and at a slight angle) that the front end of the van jumped up that high to snag its bumper onto that wire. One thing you gotta say... whoever installed that wire onto the utility pole did a DAMN good job!

Pic of that church as it looks from the side 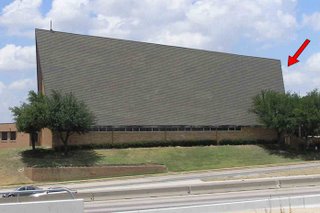 In the close-up below, you can see how even the shingles emphasize the slant of the roof. 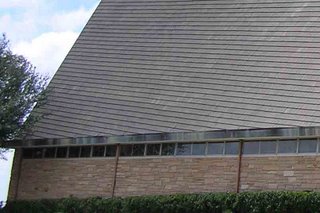 However you might feel about the design, it does certainly draw attention. If that was their goal, it certainly was accomplished.
Posted by John P. Araujo at 6:47 AM