When I last checked, the preliminary estimate on the cost to repair was 1 million dollars. The cause seems to have been a blowtorch that was used in the interior, which caused part of the roofing material to smolder, which then later became the fire. No word yet on what happens next. The walls are still up, but I think that it might be better to just demolish the whole thing and start anew. That's going to take longer, of course, but they might end up with something better than what they had initially planned.

I meant to comment on this sooner, but I wanted to see how it played out. I, for one, was glad to see that such a large group of Hispanics (I am Hispanic, for those of you who don't already know) go speak out about something. We usually are too quiet and keep to ourselves, even when we should speak out. Perhaps the demonstrations earlier in the week will help the Hispanic community to be more bold in protesting outrages and injustices.

The only thing I wasn't too happy about was the fact that so many high school kids actually used the demonstrations more as an excuse to skip school rather than being there to protest. Also, we are talking about people many of whom are in the country illegally, which does not make it easy to support their desire for "rights." Imagine breaking into someone's home, and then expecting to be treated as a member of the family. Illegal immigrants are right to raise certain issues about how many of them work at jobs that others wouldn't usually take, but their messages would have a great deal more "punch" if they also went through the process of legalizing their status, either as "guest workers" or as the start of the process of becoming American citizens. I will comment more here on this later, but I wanted to start out my views on this issue before any more time passed.

Ah yes, baseball begins as of Monday! Even though the Texas Rangers historically do not accomplish as much as they could because of inadequate pitching, each new season always starts out with hope. Right now, I would settle for some sort of post-season play. I am not so sure that I want Roger Clemens. He has had a recent tendency to get injured, and I don't see any reason why that would change just because he signs with the Rangers. Better to just go with what we have, rather than risk getting used to Clemens only for him to bail on us (thus disrupting the chemistry) because of injury. Besides, we've been let down before by such pitching "saviors" (Chan Ho Park). I will definitely be commenting often about the Rangers here as the season progresses. :-)
Posted by John P. Araujo at 6:24 AM No comments:

A fire occurred at ’s bookstore on the corner of and . According to early news reports, the fire started about 2 a.m. last night, and was put out by about 4:30 a.m. No cause has been determined as of yet. On this post are some pictures that I took later in the morning. There were no fire crews working on any fires, so I was able to get closer to take pictures of the damage than I otherwise probably could have gotten.

If the firefighters had still been battling the blaze when I went there, I wouldn’t have tried to get any closer, because I wouldn’t want to be in the way of the firefighters trying to do their job. I walked around cautiously because of all the fire retardant foam on the ground (the stuff that looks like snow in the pictures), and took mainly photos of the structural damage. I thank God that this didn’t occur during the day when it would have been occupied by bookstore staff and customers. From what I’ve heard so far, one fireman was injured, but that’s it.

The other good thing is that the contents of the bookstore had already been emptied out previously and moved into a temporary building located on the store’s parking lot. The bookstore building was about to be remodeled, and the staff and merchandise had moved into this temporary building in February while the store itself got worked on. The plan had been for the bookstore to reopen in the fall, but now it looks like the opening is going to be delayed considerably, because with this kind of damage, they probably are going to have to demolish this structure and start over. 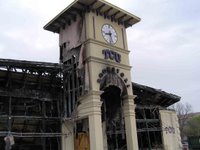 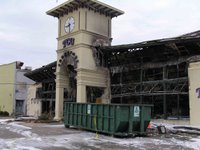 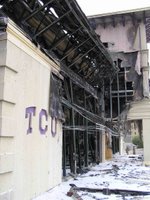 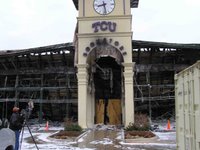 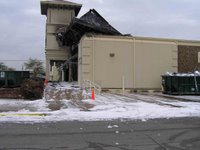 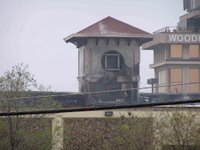 I have issued a challenge to people I know both online and in person. For Holy Week, I challenged them to fast from the Monday after Palm Sunday through Holy Saturday. So basically, each day will consist only of one full meal, plus two smaller portions that, collectively, do not equal another meal. Normally, that is done only on Fridays, but I decided to challenge them to go a whole week and offer up their sacrifice for a certain intention.

My intention will be that the example that South Dakota set in outlawing virtually all abortions will start a domino effect that will end up in the Supreme Court. It is my prayer that this happens, and that the justices will see what a mistake Roe vs. Wade was, and overturn it. This won't make abortions illegal, it would just force the issue to the states. At the state level, the abortion issue can then be better discussed rather than imposed from above without debate as it is under Roe.

So far, I haven't had any takers for my challenge. Perhaps I brought this up too soon, or maybe they think it's too hard. I'll bring it up again later when Holy Week draws nearer. I'm not even sure that I can do it, but it would make it easier if someone else does it along with me. But if I end up being the only one, I'm still going to do it.

One of the reasons that I came up with this idea was because of a recent column in Texas Christian University's newspaper that brought up that American Catholics really do not understand the meaning of the word, "sacrifice"; especially in regards to Lent. I agreed and wrote a Letter to the Editor, and it got published (By the way, that's two LTTEs that have gotten published so far this year, folks!).

Later, I thought that fasting for all of Holy Week would be a good thing to do, so I came up with the challenge idea. We in the USA live in a land of plenty, and we do not suffer from want as they do in other countries; and this challenge will serve as a taste of what people in other countries go through EVERY DAY. I'm fortunate that I have the luxury of starting and stopping a fast; and hopefully my Holy Week fast will prove to be very enlightening.

Texas Politics and other strange animals

A platypus is a strange looking animal. So is the breed of dog known as the Shar Pei (the very, very wrinkled dog). Okay, I've gotten "other strange animals" out of the way. :-)

Now on to Texas politics. I am watching the governor's race very closely, because if Kinky Friedman and Carole Keeton Strayhorn can each get enough signatures, we could very well have a 4-way governor's race. Already the national media has taken note, as I've already seen interviews done of Friedman by CBS and PBS (free publicity! What a boon for an independent candidate who's relying on his own resources!). Along with Friedman and Strayhorn are the incumbent Rick Perry and the Democratic candidate, Chris Bell.

I had hoped to find a petition of one of those candidates circulating around so that I can sign it and do my part to have an independent on the ballot. As it turns out, one of them appeared at the Student Center of the campus where I work (Texas Christian University), and it was of Strayhorn. I don't know a lot about Strayhorn or her politics, and I would have signed Friedman's petition had I come across it first. I wasn't signing Strayhorn's petition as a way of supporting her anyway, I was just supporting her independent candidate status --which won't count as a vote in November if she turns out to have views that I find disagreeable.

Right now, I don't know who I'll vote for. None of the candidates are exactly outspoken about their views right now, which is probably how they want it until the election is a few months away. However, I want 4 candidates on the ballot as a way to shake up the old two-party system that has been in place for too long. I hope that the two independents prove to be very influential in the election rather than as flashes in the pan. And if an independent is elected governer, what a message that would send to the leaders of the two major political parties. I think the parties have forgotten that they work for us rather than we working for them, and a Governor Friedman or a Governor Strayhorn would be a rather pleasant surprise for those who have been resigned to the fact that we essentially have only two political parties. Who knows? Maybe the election of Governor Kinky or Governor Grandma can be the start of something big.

But first, they gotta get on the ballot!
Posted by John P. Araujo at 10:38 AM No comments: 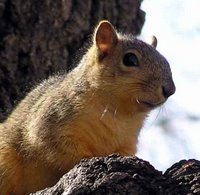 This is actually my second stab at blogging, which I was getting the hang of elsewhere, but it lacked some features that this blog site has. For example, the ability to post pictures. Attached is a picture that I wanted to post on my other blog, because this is a picture of the one responsible for any misquotes, misstatements, spelling errors, or any other problems that may occur in one of my blog entries.

I don't know his real name, I just call him "Evil Squirrel" because that's what he is. Sure, he may look cute and furry and all, but behind that face hides an evil mind --and these dudes network! So watch yourself whenever you see them hopping and skipping nearby, because they're probably gathering info on you to later post on their squirrel websites!

Anyway, I look forward to exploring these new features and seeing what they can do. :-)

While I may be old-fashioned in some ways and thinking, I do love the Internet Age and all these new means of communicating with each other. It also makes me wonder what authors of the past would have written about if they had blogs. For example, what would William Shakespeare or Ernest Hemingway written in their blogs? It boggles the mind!
Posted by John P. Araujo at 5:54 PM 2 comments: