I want one of these

I want one of these. Check this out:

Pics, or it didn't happen

In contrast to the very public signing of the health care "reform" bill earlier this week, President Obama chose to have his signing of the executive order maintaining the status quo in regards to funding abortion away from the eyes of the press. I, for one, have no faith whatsoever that this will stick, because Obama is a known legalized abortion supporter.
Posted by John P. Araujo at 6:02 AM No comments:

Just so you know, I had practically no faith that the pro-life Democrats would hold out when the chips were down on the health care "reform" debate. I also have ZERO faith that President Obama will come through with his executive order that is supposed to ensure that existing limits on federal funding will remain in place. Obama promised a lot of other things that he ended up not doing, remember? (We're still in Iraq, right? Gitmo is still open, right? Among other things.)

While I may not necessarily agree with having "baby killer" shouted at Rep. Bart Stupak when he was placing his vote, no doubt if he is a pro-lifer worth any salt, it will have hurt to some extent, and his vote will come back to him when (with a heavy emphasis on "when") he finds out that Obama not only did not come through, he actually expanded funding of abortions - if not outright get rid of any limitations to the funding of abortions.

The pro-life Democrats were the last hope that the Democratic Party would have a revival to get back to their blue-collar working class roots (and anyone who believes that the Dems are still such a party is blind beyond belief), and now that hope is officially dashed. The Democrats have no more heroes, folks - only sellouts. We will have to look for our heroes elsewhere.
Posted by John P. Araujo at 7:23 AM No comments:

Do or die for the Democrats? More like Do AND Die

There is a saying that the definition of insanity is to repeatedly do the same failed thing and expecting a different result each time. That is what we have currently with the Democrats and their latest scheme to pass their enormously unpopular health care "reform" bill. This time around, they're trying to slip this by as having been "deemed" passed without actually having voted on it. This is to get around having to be on record as voting for the bill in one way or the other. If they go this route, this will demonstrate a staggering level of cowardice the likes of which hasn't been seen - well, for a very long time.

Politicians are not known for bravery - their whole purpose in life is to get re-elected, and they get re-elected by having as little as possible on their record that might trip up their re-election chances. Such motivations encourage cowardice in times like now - but this latest legal maneuver would demonstrate a level of cowardice that is surprising even for them. The Dems keep trying to blame the GOP, but this needs to be repeated: If the Dems really wanted this bill passed, they could have done this themselves a long time ago without any GOP interference. The fact that it hasn't been passed now is because of inter-party interference, not GOP interference.

Some time back, I had expressed my dissatisfaction - no, disgust - with the current Democratic Party. Whatever they had been in the past that was worth supporting has long gone, and the current party leadership has demonstrated an embarrassing level of cluelessness and arrogance; so much so that I had hoped that the party would implode so that it might start over. I had taken that back because I knew that there were still a few Dems fighting the good fight, but in recent months, I have given up that hope. The current Dem leadership, of which I regard Speaker Nancy Pelosi as the worst of the bunch, demonstrates a level of blind, naked greed and ambition that is willing to sacrifice its own party members to get their will done - no matter what the cost to their party or individual party members.

Failure to pass this bill would probably be the second best thing to happen. This would at least allow time for the Dems running for re-election this year to scrub themselves clean of this whole health care "reform" mess before November runs around. If the bill does pass - especially in this current " 'deeming' it passed without actually voting on it" scheme, then the best thing to happen would be for the party to implode and the whole sorry rabble to be voted out of office. Then the Democrats that remain would have the choice to either clean their act up, or to simply dissolve as a party. This whole mess is occurring because of a few blind individuals, and their shameless greed should not be rewarded.

Let me also repeat here that this is NOT to say that I am opposed to health care reform. This is also not to say that I favor the current status quo. I am indeed in favor of changing some things. However, the problem with the current Democratic leadership is that they are insistent that their version of health care "reform" is the ONLY way to get it done. Their repeated insistence on getting it passed with their version to the exclusion of all others is all the more reason to oppose it, because the more nutzo schemes they keep coming up with to pass it, the more suspicious the rest of us should get - especially the rank-and-file party members whose own re-election chances are on the line. How did the Dems get themselves into such a sorry mess in the first place?
Posted by John P. Araujo at 6:47 AM No comments:

Possibly coming soon to your local airport are: Shoe scanners! No more taking off of your shoes; now this scanner will check your shoes for you. It seems to me, though, that it should also shine your shoes while it is scanning them. :-P

Should Speedy Gonzalez make a return? 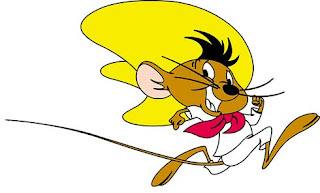 Just for the sake of disclosure (and in case you didn't know it already), I am Hispanic. With that context in place, I want to say that I would like to see Speedy Gonzalez brought back, even if it's just for a movie.

I understand why some would be offended with some of the representations of Mexico and Mexican culture in the Warner Bros' animated shorts from the past. However, to censor them would be to ignore our past and how we used to think, and no one benefits if we try to change the past. For my part, I enjoyed watching Speedy Gonzalez - and yes, even "Slowpoke Rodriguez". Who from my generation doesn't remember that classic line in which Slowpoke appears, when one of the villains says, "Slowpoke Rodriguez, he packs a gon (gun)".

I agree wholeheartedly with this line from the above linked column: "All I know is that I enjoyed his stories as a kid and viewed Speedy as one of the cooler fictional mice around, better than Mighty Mouse, better even than the iconic Mickey. " Folks, I am here to tell you that Speedy was WAY, WAY cooler than the intensely bland Mickey!

So I say, bring back the mouse from Mexico. And his cousin Slowpoke, too. Just give him some Red Bull and maybe it will speed him up some. Just don't offend him, because he does pack a gon - er, gun - after all.
Posted by John P. Araujo at 7:53 AM No comments:

The Dems are headed down the path of insanity

So now we know how important the passage of the Democrats' health care bill is to them: It means EVERYTHING. No matter the cost, whether fiscal or political, all that matters is that it passes, even if the Dems have to skip steps and take shortcuts to get there.

What Obama wants to get through is not even the bill that was debated on; it's his own creation, and they seem to be patting themselves on the back for having thought up a means of getting past the fact that they no longer have the 60 votes needed to make it filibuster proof.

The Dem leadership has of late been trying to color the GOP as the "party of no", but the GOP until last month did not have the votes to stop the Dems had they all wanted this bill passed, but it did not go through because it was the Dems themselves that held it up. Now with this alleged health care "summit" (which was actually one last chance for the GOP to do things their way) out of the way, we saw the Dems' true colors: It's still their bill in their form that they want passed, and now they're going to go with this option that needs only 50% of the Congress rather than 60%.

It's my sincere hope that, just as Dems held up the bill getting through when they had 60 votes, that they will continue to hold it up even when needing only 50 votes. I'm hoping that enough Democrats will finally find the strength of character and the sense of right and wrong to say "Enough!" So far, it's be a sad and sick display of party loyalty at all costs despite the fact that many Dems have problems with this bill.

Many Americans want health care reform, but not in the form of THIS bill. THIS bill needs to die and the process of reform to start over. But no, THIS bill is all that the Dems will accept, and it's THIS bill that needs to go through no matter what. Someone stands to gain probably both in power and in dollars with the passage of THIS bill, and it's why the Dems are fighting so hard, so determinedly, and so illogically to get it through.