Well, unlike some people I've talked to, I didn't predict a sweep in the Dallas Mavericks' series against the Miami Heat. There was a reason that the Heat got to the Finals in the first place, and there was a reason that they dethroned the Detroit Pistons (who had won an NBA championship and an Eastern Conference championship the previous two years) to get there. I knew that the Heat had to win at least ONE game for that reason. Ya gotta understand, it was a matter of pride that they not go out without at least one win --especially since they were playing on their own court. Well, they got their one win. Coach Avery Johnson will now adjust accordingly, and the Mavs will not lose again.

But rather than dwell on this one loss, let's instead check out this pic of a local church: 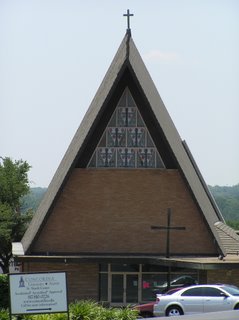 In the pic above, the roof has a very severe slant. The edge of the roof that is at this end (the back of the church) is much lower than the front end (with the cross on top), so that you end up seeing an interesting visual effect of the roof looking like some kind of border or trim around the back entrance to the church, rather than being the roof of the church. I'll let you look at this for a couple of days, then I'll post how this church looks from the side, so that you can see what I mean about the severe slant of the roof.
Posted by John P. Araujo at 7:23 AM