(NOTE: For some reason, I couldn't get the Weekend Wrap-up to load up Saturday. My apologies on its tardiness.)

The title of this week’s Weekend Wrap-up is: Why I’m no longer a liberal Democrat.

This week started out looking like Mel Gibson was going to be raked over hot coals by his critics for the rest of the year due to his anti-Semitic comments that he made while under the influence of alcohol. Those comments were the sort of comments that his critics had hoped that he’d make leading up to the release of his 2004 movie, “The Passion of the Christ”.

Since Mel didn’t do that during that time, his critics instead went after his Holocaust-denying Traditionalist Catholic dad. “Sins of the father” and all that. But picking on an old man didn’t look good; nor did it necessarily mean that just because Mel’s dad held these anti-Semitic views that Mel also held those views. Granted, Mel was most likely raised under those ideas, but Mel, like any of us, is also capable of growing beyond the lessons of his father. But I digest…

Now we come to events of this week, and Mel finally showed his true colors during a traffic stop for speeding. Well, if you can count what a person says while under the influence of alcohol as showing their true colors. And that’s the issue here: Was Mel really speaking his mind when he said those alcohol-pried anti-Semitic remarks? I suppose we’ll never know.

However, Mel did apologize—and he apologized again, the second time with feeling. It must have been just enough, for the news reports on Mel stopped for almost two days. Had it NOT been enough, the media barrage would not only have continued unabated, it would have intensified with headlines like, “Mel’s apology fall flat”. Later in the week, the reports returned, mainly to mention a film clip of him taken that night a little before the pullover.

I think Michael Medved pretty much says here what I feel about this whole situation. The man apologized, now I say give him the chance to back up those words with action. But his critics no doubt are not going to rest for long, for they still haven’t forgiven him for making The Passion, and they likely never will. In their eyes, he'll always be on "permanent probation".

This coming week is the state of Connecticut’s primary, and we’ll soon know if Joe Lieberman is going to be the Democratic nominee during November’s election. He faces a serious challenge from Ned Lamont, who is calling Lieberman out on his stand in favor of the war. Lieberman has been a loyal Democrat during his 18-year career. I’ve heard him referred to as “the last JFK Democrat”, and I’m inclined to agree.

This infighting among the Dems in Connecticut has become a microcosm of what the Dem party is on the national scale: divided between the old school “JFK Democrats” and the current intolerant left-wing power-mongers who wear velvet gloves over their iron fists. It’s because of those shortsighted power-mongers that I no longer consider myself a Democratic supporter.

It’s a bit disturbing that most prominent Democrats will only say “I will support the winner of the primary” rather than come out in support of Lieberman. Their lack of support says all that needs to be said of what they think of him. However, I got an interesting insight of what’s in the collective mind of the Dems earlier this week with a Google search. From that search on Google News, I saw that many Democrats are worried about the outcome and the potential fallout from the results of the primaries – especially if Lieberman loses.

Lieberman has already said that if he loses the primary, then he’ll run as an independent. If he wins, it could look really bad for the Democrats, for they will have been on record of having gone against one of their own. It will be bad because it will show that they are not at all the “party of tolerance” like they claim to be, but rather a party as intolerant as they claim the GOP to be.

And for what? One issue: the war. All of Lieberman’s previous works on the behalf of the party means nothing now. His largely liberal track record is now considered erased and rewritten with “Bush backing right wing war supporter”. And – horror of horrors – Lieberman’s been on (gasp!) Sean Hannity’s show! Several times! Why, he’s chummy with a right wing nutjob!

The Dems right now are so hard-line and intolerant that anyone speaking with one of – “them” – will have that action held against them later. As they are doing to Joe Lieberman now. You know what’s funny about all this? Had Mel Gibson been treating Joe Lieberman the way his own party is doing right now, Mel’s critics would be offering that as proof of Mel’s anti-Semitism!

I’ll never understand the left wing’s fascination with Fidel Castro. Castro does not allow free speech, free expression, or a free press in Cuba. His style of leadership is that of a tyrant. What’s to like about that from a liberal standpoint? Castro is the last of the old, old school of Soviet style Communism, which is why some of the left hold him in high regard.

Back in Communism’s heyday, many on the left considered it the solution to the world’s problems. Its collectivist style of government in which the government gathered all the country’s power and material goods and redistributed them among its citizens was seen as the height of evolutionary development in systems of government. But Communism in the Soviet Union didn’t make it out of the century that it started in. That fact alone makes Communism a failure. Why it failed is a topic for another discussion, and all we need to know here now is that it failed, and that it failed rather quickly from the perspective of world history.

Which brings us back to why Castro holds such fascination with the left wing. No doubt this suggests that these lefties still harbor a world run under a Communist system – this despite that Soviet Communism died out, and that Communism in China isn’t like what it was in Russia. And this is also despite the fact that Communism in Cuba is a failure as well. Cuba is not a worker’s Utopia, but rather a prison for its citizens, who are denied contact with the outside world.

I suppose if you want to keep a population in check, it’s best to keep them ignorant of how well they could really have it. If they knew what Castro had been denying them all this time, they might run Castro out of the country and into the ocean. Nope, it’s best to keep them in the dark, and deny them what little hope they could have for a better life. If such a life of utter drudgery under a totalitarian government is what the lefties consider the height of evolutionary development of systems of government, then just leave me to my misery in the U.S.

And speaking of Castro, below is my first edtoon in ages. Just for you folks, I even colorized it. I mean to be more productive in that regard, but work on stuff for my website plus recent events in my life have left me with less time than I thought. Plus, at times that I had thought of an edtoon, the news event had already passed and the edtoon wasn’t as funny. Thing is, I really love doing edtoons. I’ll try harder to put out more on a consistent basis. In the meantime, enjoy! 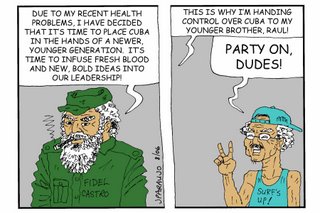