It's been literally months since I made an editorial cartoon, but the continued "bra-ha-ha" over Hillary Clinton showing cleavage is just too good to pass up. First, look what kind of "ink" (or rather, "pixils") this story is getting. Here is a Yahoo! search on Hillary cleavage.

If you notice, some of the headlines can't avoid making puns. For example:

In my previous blog entry on this topic, I mentioned that, because Hillary is the first female candidate for president, it really doesn't set a good example to be giving so much press coverage on this topic. The focus should be on her and her ideas, not her chest. Focusing on body image is only going to set the stage for any other female candidates to have to endure the same critiquing over her appearance and fashion choices. Is that what we really want to put women through?

And yet, despite Hillary's complaints over this issue, she still decided to use it as a fundraising ploy. Funny thing is, I thought that they were talking about the first picture that I posted, which is below, but there is actually a second picture, which to me suggests that maybe this cleavage controversy wasn't accidental. That is, this "exposure" might have indeed been her intent to draw this attention - but again, is this a good tactic to take? I was kidding when I said in my previous blog entry "Hillary's new election tactic?", but maybe it really is. She'll never admit it publicly, of course, but if that's what she's resorting to, then it's not a good sign.

Okay, on to the photos, followed by the edtoon. 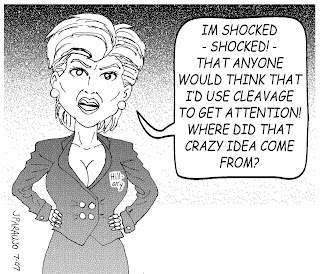