Attached below please find my first edtoon in a while. 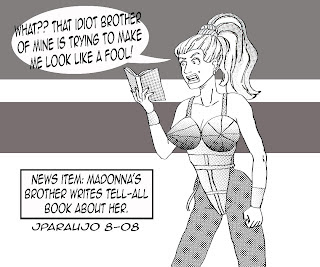 This is in reference to the news story that Madonna's brother Chris wrote a tell-all book about her. As I was Googling that story, however, I also saw this story about Chris' denial that Madonna had any hand in writing the book. Hmm..... To be honest, I wouldn't put it past her. By the way, the costume she's wearing above is based on an actual costume that she wore - so I wasn't making it up; she really did look like that.

I've noted in the past (not in this blog) that associating with Madonna can be a career-killer. Let's look at the short list of who's associated with Madonna in the past: Dennis Rodman, Sean Penn, Rosie O'Donnell, Britney Spears, and now, Alex Rodriguez. Before Madonna they were cool and on the rise; after Madonna they went insane and their careers took a dive after that. It's too early to tell if that's going to happen to A-Rod, but the early indications aren't good. It was nice knowin' ya, Alex. Let that be a lesson to you, folks - Madonna bad. Unless you don't care that your career will go south faster than a cop snarfs a donut, avoid Madonna like the plague.

The edtoon above represents the first time I've tried inking one of my toons with a brush rather than a pen. Brushes take some getting used to, and I've still got some work to do before I master it. But now that I'm used to it somewhat, I think I'm getting the hang of it.

The edtoon above is also representative of how my edtoons have changed since back in the day that I did them for my college newspaper. I wish I had that computer tint in the past. That's the coolest. For those of you who want to know the software that it's from, it's from a series of how-to artbooks titled "How To Draw Manga: Computones" - but be sure to get only the ones that say "Computones", because they're the only ones that have the disk with the tints. So far, there's only 5 Computone books, and from the looks of it, that might be all, because I haven't seen them in the bookstores in a while.

In case you're curious, I didn't buy the books to learn how to draw in Manga style, because I just can't get the hang of that freaky Japanese style - especially those triangular-shaped heads and the humongous eyes. They look like the heads of praying mantises! Here, look for yourself! 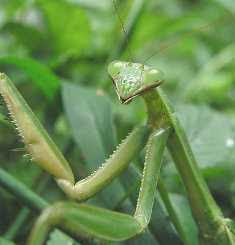 See the resemblance? I think the Manga characters descended from praying mantises.

I'll try to post edtoons more often, especially because it's an election season. Next time I'll post my first attempts at drawing Barack Obama and John McCain.
Posted by John P. Araujo at 5:26 AM

And, yeah, canoodling with Madonna is rarely a good idea. She might have even killed Warren Beatty's career, to think of it.

I had forgotten about Warren Beatty. There's another one, folks! Another career tombstone in Madonna's graveyard! BEWAARREEE!!!!