With this blog entry, I have reached the 500th post milestone. Just thought I'd mention that. To see what I posted on my first entry, click here. By the way, that evil squirrel is still out there - waiting. Watch yourself. Maybe for this month, I'll post my Top 5 Favorite Posts or something. I'll let you know.

Below is my next editorial cartoon. This is of my character Alicia from my old college comic strip, Academia Nuts. If I can figure out how to make one of those webcomic formats, I'd like to have an updated version of my characters of their experiences post-graduation. I tried using a blog format, but I don't like how it works for a comic strip. If and when I get that webcomic started up, it's going to be called Along Party Lines - because it's going to discuss political and social issues. Over the semesters, Academia Nuts eventually morphed into a political/social commentary strip anyway, so APL is going to be a continuation of that.

Alicia is my liberal character, and she was also my favorite, because her passion made for many funny and interesting storylines. For this edtoon, I used brush again and the Computone tint. I also added color and used a font that is normally for Manga art. I like that font so much better than my own handwritten lettering. Lettering has always been my weak point. I'm embarrassed whenever I look at my earliest strips, because the lettering is so bad. That font is what I'll be using now instead of my handwritten stuff.

Anyway, my intent for the edtoon below is to make a t-shirt out of it. It's also to encourage people to vote, as well as being a little promo for my character and the strip. Let me know what you think of it. When I get the shirt made of it, I'll let you know how it turned out. 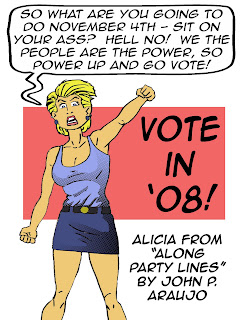