Recently when digging through old papers, I came across some Star Wars art that I had done back when Star Wars wasn't relabeled "A New Hope" and it was still the first Star Wars. Anyway, I did this art when I was a teen and before I had ANY art training - so it looks like the art of a teenager before he had any art training. It ain't pretty, in other words. I had to slightly "Photoshop" it in order to show the pencil strokes, because the passage of time had faded the art somewhat. 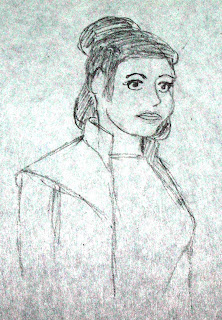 Can't figure out what that is from? Actually, it's from The Empire Strikes Back. Below is a pic of Leia in that costume that I'm supposed to be drawing: 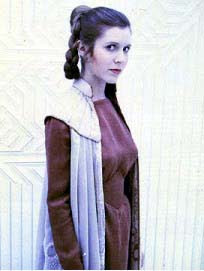 So what do you think? I suppose, considering that it's done by someone with no art training, it's actually not bad. But he does need some art training to get better. And why am I referring to myself in the third person?

Later this week I'll post another Star Wars art. It's one of the few color art that I've ever done, and I'm surprised that I had the patience to hand color it, especially when I was a teenager.

I think I'll also dig out other old art and let you try to figure out what I was supposed to be drawing back then. By the way, I also had a full head of hair back then. Ah, where have the years gone?
Posted by John P. Araujo at 2:44 PM