While Barack, Hillary, John, and Mike have been out stumping for their respective campaigns, I have made a new campaign poster. It's based on this well-known image of Che Guevara: 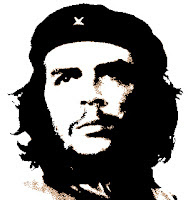 Che was a Communist, but I'm an American! What I mean is this: The nature of Communism is to believe in the state, which comes at the expense of the individual. However, I believe in the power of the individual over the state. While communists and Communism claim to be a "workers' party", it actually serves the state - the infamous "Big Brother" of George Orwell's 1984. I, however, plan to be a "man of the people" instead of a Big Brother. I will actually be helping the little guy rather than the almighty State.

I intend to be an "old school" Democrat the way the Democrats used to be, instead of the special interests and big money servant that they are now. I guess this would make me a "regressive" rather than a "progressive", because if what the Dems advocate now is progress, then leave me out of it. I'd rather regress to what they used to be.

What I mean is, if there indeed arises a groundswell of desire for me to run, then I'll see what I can do to actually run for office. What a message it would send to politicians for the American voter to give me any votes, much less enough for the pols to take notice.

So, while I was initially kidding about running, I also decided that if enough people actually want me to run, then who am I to deny the will of the people? Even so, I still don't anticipate getting any sort of following - but I'll be open to the possibility just in case. It's up to you, folks.
Posted by John P. Araujo at 7:39 AM