Ivan "Pudge" Rodriguez has turned to the dark side!

Remember that scene in the first Star Wars (the 1977 one!), in which Princess Leia's home planet of Alderaan was destroyed by the Death Star? Remember how Obi-Wan Kenobi had sensed through the Force the destruction of an entire planet that so shook him that he had to sit down to gather himself? That's how we in Rangers Land felt when we heard the news of former Rangers catcher Ivan "Pudge" Rodriguez joining the New York Yankees.

Pudge had been with the Texas Rangers baseball team for years. He's still a fan favorite even now. But to hear that he joined the Evil Empire, the Dark Side, the Buttered Side Down of major league baseball - well, it was like hearing that the neighborhood kid that everyone liked had joined a gang. Pudge has had a fine career, and he deserves the Hall of Fame one day. But if he's wearing Yankee pinstripes in the Hall - sigh. It'd be like seeing Mr Rogers in a Nazi uniform.

UPDATE: I was hoping that it was just a vicious rumor, but... 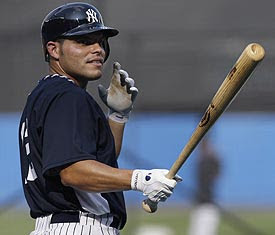