ACLU censors itself –maybe it should sue itself, too
The famed American Civil Liberties Union, known for protecting all forms of free speech no matter how vile or offensive –is ironically considering censoring some of its own. This leads me to wonder if the next headline we see will be “ACLU to sue itself for attempt to censor itself.” I hope that they do, because that would be an interesting court case to sit in on. ;-)

Ken "Frito Bandito" Lay and Jeffrey "Light-Fingered" Skilling
Ya ask me, these guys had it coming. I would feel that way even if you didn’t ask me. It’s REALLY hard to feel sorry for these guys, because their actions demonstrate everything that is wrong with corporate culture today. I hope that they spend the rest of their lives in prison for the harm that their selfish actions did to their employees. Many criminals get much more time for crimes that are much less than Lay and Skilling’s multi-million dollar theft of their employees and stockholders. Sometimes, the system works!

Pussycat Dolls too sexy for the toy store
Until this news article, I had never heard of the Pussycats music group. They sound like the latest version of the Spice Girls (remember them?). After reading this column on the group, I am surprised that Hasbro even considered making a line of dolls based on them. Someone at Hasbro apparently wasn’t thinking right on this one. It also makes me wonder what is next. Perhaps a Janet Jackson doll with a “malfunctioning wardrobe” outfit, or an Anna Nicole Smith doll that eats your food and takes your money? Or maybe a Tom Cruise doll that hops up and down on your couch when you press its button. ;-)

Sports
After a frustrating loss in Game 1 of the best-of-seven series, the Dallas Mavericks bounced back in Game 2. I knew Coach Avery Johnson wouldn’t let the Mavs lose a second game. Now the Mavs need to add to their success by winning the games in Phoenix. I still stick by my belief that the Mavs can do this, and go on to the NBA Finals. But they gotta take care of “bidness” in Phoenix first!

Meanwhile, the Texas Rangers baseball team still stands atop the West Division; thanks totally to the fact that the West is the worst division in baseball. The Rangers’ bare margin above the .500 mark is enough to be the winningest team on a division with poor won/loss records. I had hoped that the Rangers would strive to be better than that, but I guess that I will have to take what I can get. Sigh.

Pics of a blimp
Last weekend, Fort Worth hosted its annual Colonial Golf Tournament. A sight that appears at that time is the blimp that is used to shoot those overhead shots for the sports stations that cover the tournament. The blimp provided too tempting a test for my digital camera’s features. My camera has something called “superzoom”, which zooms in by a magnification of 10; and the “digital zoom”, which zooms in by a magnification of 40. The superzoom feature was not easy to use, because the blimp is a tiny an object in the sky, and with the tiny viewscreen that’s on my camera, it took some effort to find a tiny blip in the sky.

However, that wasn’t so much of a challenge as trying to photograph the blimp with the digital zoom feature! The main problem was keeping the blimp in my viewscreen long enough for the camera to focus on the blimp, and to photograph it before it moved out of my screen. It doesn’t look like it from my vantage point, but the blimp is actually moving, and it’s probably moving a lot faster than I think. Anyway, after several failed attempts of trying to capture the blimp fully focused and totally within the viewscreen, I got the image below. It was about time, too, because the sun was baking my face as I tried to get the pic. Now along with the pic below, I have the face of a bronze god. 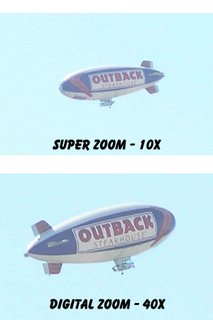 Memorial Day notes
Monday is Memorial Day, in which we recall the sacrifices of the men and women in our armed services who have served in the past, and who continue to serve us today. In many parts of the world, the military serves as the fist for the person in power. Fortunately, our military does not work that way. They serve to protect us from those who desire to do us harm, and to protect our democratic way of life. While there are those who question some of the actions that our military does (for instance, the war in Iraq), most Americans understand the role that the military serves in our country, and they appreciate it. So on Monday, remember our servicemen and women who have taken upon the responsibility of protecting our country –especially remember those that paid the ultimate sacrifice in the performances of such services. May God guide them all in the exercise of their duties, and for those who have died while in the line of duty, may God have mercy on their souls, and may He grant them eternal peace. It is because of people like them that people like me have the freedoms that we do.

Have a great weekend, folks!
And have a great summer!
Posted by John P. Araujo at 8:46 PM